with its myths, legends, abbey ruins -a place of pilgrimage..

Glastonbury Tor, 150m above sea level. For its King Arthur legends- Isle of Avalon where Arthur was buried and the areas association with all things mystic and a destination for pilgrims for many centuries. Archaeological evidence suggests the Tor was first settled in the 5th century. It is known the first church was built on the summit sometime before 1243, but only 32 years later this was destroyed in an earthquake. The tower on the top is in fact all that remains of the monastic church of St Michael, the second church to be constructed at the site. This soon fell into ruin following with the Dissolution of the Monasteries in 1539. The last Abbott of Glastonbury Abbey was hanged for treason from this very summit.

On a happier note there are stunning all round views from the summit, and often witness the most magical sunsets. On a warm spring or summer day there is nothing nicer than just sitting quietly taking in the surrounding vista. Imagine that until the surrounding Somerset levels were drained in the forth century the tor would have been totally surrounded by water for many months of the year, and only reachable by boat. Imagine also all the pilgrims that have climbed the tor in times past. 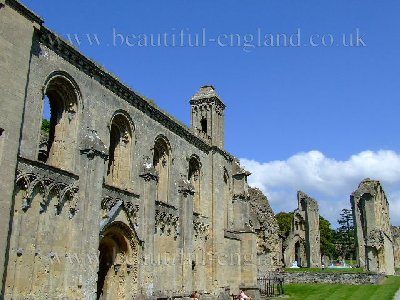 The Abbey, Walls and Crypt of the Lady chapel dating from 1176, . Even when one sees a model of what the vast Abbey might have looked like- it is difficult to take the grandeur that was Glastonbury Abbey. Only Westminster Abbey was once larger and more wealthy. Wander the delightful grounds- see the Abbot's Kitchen, the Duckpond, of the Nave only the only bare south isle wall remains.

The Abbey Tithe barn is a few miles away and is now houses the Somerset Rural Life Museum. For centuries until the Dissolution the Abbey was a place of pilgrimage.

In the High St is the George and Pilgrim Hotel, built by one of the Abbots in the 12th century to accommodate the large numbers of pilgrims visiting the Abbey. One of the countries oldest surviving Inns- still to this day a delightful place to stay. Notice the nearby market cross? The present example dates from the 18th century. St Benedict's Church at the top of the High St, present church dates from 1520, built by the Abbot. The now Parish Church of St John the Baptist with its fine tower, holy thorn in the churchyard.

Glastonbury Thorn (the holy thorn) blossom's at Christmas and in early spring, the latter often coinciding with Easter. Said to have grown from the spot where he pushed his staff into the ground at Wearyall Hill to the south by St Joseph of Arimathea. Several examples of which survive descended from cuttings taken before the original was cut down by Cromwell's Soldiers, One in the Abbey grounds, another in the parish churchyard, and a third in the garden of Wells Cathedral

Visit nearby Bath. The city is an masterpiece of Georgian architecture. Designated a World Heritage Site. Visit the Cotswolds. Villages of mellow stone, rolling hills, winding rivers and water meadows. Castle Combe and The Slaughters. Visit Wells one of England's smallest cities a delight to explore, dominating the skyline -the Cathedral.

White Hart Hotel Wells A 15th Century Coaching Inn offering 15 en-suite bedrooms, conference facilities for up to 150, extensive brasserie menu and separate restaurant. Dating from the 15th Century the hotel occupies a very desirable position in the heart of the medieval City of Wells.

Meare Manor Meare [Nr Glastonbury/ Street] Situated 3 miles from Glastonbury and Street in the heart of the Somerset Levels, we are ideally situated for both a relaxed but convenient weekend break or a longer stay to fully explore the local area. The Country House is within easy reach of: Historic town of Glastonbury, Cathedral City of Wells, Cheddar Gorge & Wookey Hole Caves, Clark's Village at Street.

Three Abbey Green Three Abbey Green is a Grade 2 Listed townhouse dating back to 1689. Set in an historic square in the heart of Bath, it provides a superb central location for exploring the city. The Abbey, Roman Baths and Pump Rooms are on the doorstep.