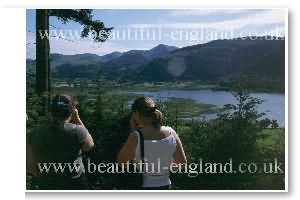 A pair of osprey have bred in the Lake District since the year 2000, the first time ospreys had bred in England in over 160 years. In 2013 the female laid three eggs, with two chicks hatching in late June. Adults return from Africa in early April- the arrival date varies from year to year-for example in 2002 the male arrived on the 3rd April with the female arriving on the 18th April. In 2013 they utililised the same nest as they had the year before in a dead oak tree. In 2006 three chicks fledged. In 2003 one chick survived to fledge. Prior to 2000 ospreys had been seen in the Lake District but had not nested - the National Park Authority and Forestry Commission had joined forces to build several nest platforms in what eventually turned out to be an successful attempt to get one such pair to breed. The dead oak tree is the third choice of nest site in the last ten years. Fledging is likely to occur in July, with both adults and juveniles leaving for Africa in August. Ospreys pair for life.

Birdwatching Lake District. Birdwatching Lake District. Views of the nest, a mile away, can be had from the two viewpoints in Hood Wood off the A591, parking is available in the Dodd Wood Car Park. The adjacent Old Sawmills Tea Room offer delicious food in a very pleasant setting. It is a longish walk, up a gravelly track to the viewpoints where, when open, binoculars or telescopes provide good views of the nest. You may be lucky and see the male osprey, resting on his favourite perch on the lakeside between fishing trips for his fast growing offspring and their devoted mother, or if you are even luckier actually see him bringing home a fish.

Within the Whinlatter Forest Visitors Centre, live pictures beamed back from high definition cameras keeping constant watch on the nest are viewable on video screens and provide fascinating viewing - the chicks can sometimes be clearly seen despite only being a few days old. Please do not encroach upon the nest and leave the birds in peace. Both the Viewpoints and Visitors Centre are clearly signed and a few miles north from Keswick in the North Lakes.

Other locations in Britain where Ospreys have breed succesfully include Loch Garten in Osprey Scotland, Rutland Water in England and Glaslyn in Wales.