Atlantic Puffins. From the Farne Islands Northumberland, and Scotland 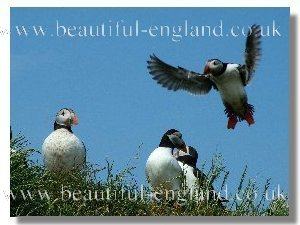 Puffins, often known as seabird clowns of the air, gather in usually inaccessible offshore Island puffinries to breed . What makes both the Farne Islands Northumberland and Treshnish so special is that they can both be reached with ease; from Seahouses in the case of the Farnes, and from Mull on the West Coast of Scotland in the case of Treshnish. A fast boat the Turus Mara runs daily trips in season weather permitting.

Atlantic Puffins where do they nest?

Puffins nest in burrows underground ,under boulders, or in rocky crevices. One egg is laid. After hatching the young puffin remains underground concealed in the nest, until the night comes for it to head for the open sea, not to return until it is ready to breed, usually some five years later.

All from Treshnish Islands, off Mull West Coast Scotland

Puffins are skillful fishermen able to catch and hold up to a dozen or so sandeel in their beaks. Puffins favour grassy slopes, covered in pink thrift and other wildflowers, forming a great backdrop for photographers keen to capture the puffins, social gatherings and hugh wheeling flypasts so characteristic of a puffin colony.The Farnes are owned by The National Trust. For boat trips to the Farnes Aboard Motor Vessel 'Glad Tidings'

When is the best time to see the Puffins on Farne?

Though dates vary slightly from Year to Year, the first puffins start to return in Early April. By mid May the oh so cute Eider Duck chicks will be hatching. Most Eider will have left the Islands by the end of the Month. Mid June sees the hatching of young Kittiwake and Guillemot. Puffin numbers increase until by early July they are at their peak with all the non breeders and juveniles present. The air will be alive with parents returning with mouthfuls of sandeel, making a dash for the safety of the burrow, before the herring gulls can mob them.

Also by early July too, most of the young Kittiwake, Guillemot and Arctic and Sandwich Tern will have fledged and left the Islands. By late July all the puffins will be gone, the youngsters going to sea under cover of darkness, leaving the Islands to the Grey Seals and the Winter storms.

Watching wildlife, particularly in remote offshore locations does have its hazards, both in reaching the location, and then exploring it. You must take great care at all times. Cliffs are dangerous. Keep away from the edge and from sudden drops. Landing from and onto boats can be dangerous even in the hands of skilled careful skippers and crew. Wet grass, gangways and boardwalks can be slippery, paths may be loose, and unlikely to be maintained if made up at all. Wearing sensible clothing and footwear is advisable. Do not approach wildlife close up. Keep away from any livestock, which may be feral and not used to human presence. You visit such locations and watch wildlife solely at your risk and discretion. Take care and have an enjoyable time.

Click on the image for its title and larger view
More Places in Britain to see puffins
Boat trips,and lots of links too

Haven Holidays Berwick nr Berwick-upon-Tweed Holiday fun with the touch of luxury! Berwick offers an exhilarating holiday mix of town and seaside, coast and countryside. Nestling in the heart of beautiful border country with direct beach access, every family will love a break at Berwick. Berwick is a sensational 5-star Holiday Park overlooking a beautiful beach, just a stroll from the historic border town of Berwick-upon-Tweed.