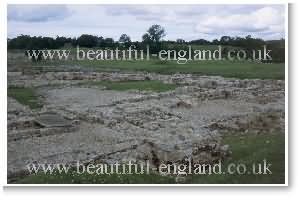 Hadrians Wall Vindolanda and the Roman Army Museum Anyone who takes the trouble to visit this one of the best preserved Roman Forts ( and surrounding civilian settlement) some 2 miles south of Hadrians Wall cannot fail to be impressed at not just the sheer size of the site, the vast extent ofvisible remains, but also the incredibly well preserved state of many of the thousands of artefacts found thus far. due entirely to the anaerobic ground conditions.

Wax stylus and ink writing tablets, made of birch oak or alder, still legible after nearly 1900 years- the earliest archive of written material in Britain. One such tablet contains an invitation to a birthday party sent to the commanding officers wife , another details payment for bushels of grain. Many of the artefacts are on display in the Museum. hadrians wall soldiers

Excavations continue every summer, and you may be lucky enough to see these taking place. During our visit yet another writing tablet was found to add to the hundreds already unearthed, as was a roman hair brush. archaeology roman britain hadrians wall roman legions.

The grounds include a replica Roman Temple and a section of Hadrian's Wall has been reconstructed to its believed true original height From the B6318 Military Road, Vindolanda is well sign posted about half a mile east of Twice Brewed. Turn The site is run by the Vindolanda Trust & there is an entry fee. Joint tickets available with the Roman Army Museum.